My sister-in-law recently gifted me a copy of R. Sikoryak’s weird but wonderful comic Terms and Conditions, which “adapts” the 2015 iTunes terms and conditions into a comic format. I was as delighted by the gift, which I’m sure only contributed to her bewilderment (she knew I wanted the book, but I can’t blame anyone for not understanding why I wanted it).

One of the gags of the comic is, obviously, the idea that a comic adaptation would get you to actually read through the whole document instead of just pretending that you have. The other gag—and one that breaks up the monotony of reading through the document—is that each page is an homage to a famous work of comic art, but with Steve Jobs inserted in the place of one of the characters. My favorite is one that I’ve shared in a previous post about the book, a shout-out to Frank Miller’s The Dark Knight Returns: 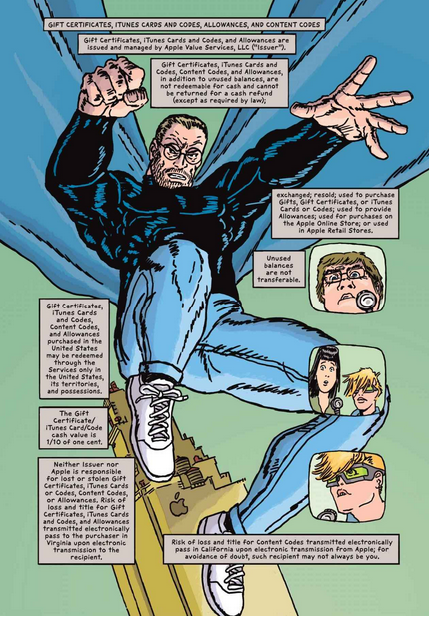 As much as I love the concept behind this comic, it’s still taking some real effort to make my way through. Last night, though, I came across something that definitely stood out to me. Here’s the passage as it appears in an R. Crumb-inspired page of the comic:

Only persons age 13 years or older can create accounts.

Accounts for persons under 13 years old can be created by a parent or legal guardian using Family Sharing or by an approved educational institution.

Children under the age of majority shoud review this Agreement with their parent or guardian to ensure that the child and parent or legal guardian understand it.

By way of reminder, if the passage appeared in this comic, it presumably appeared similarly in the 2015 iTunes terms and conditions—there’s definitely similar language in its current successor, too. This strikes me as a particularly laughable part of a terms and conditions document, but also one that strikes me as having real consequences for technology use in educational settings.

The laughable thing is the idea that any parent would sit down with their child to read through the terms and conditions. Clearly, parents themselves aren’t reviewing the document for their personal use of Apple products, so what makes Apple think it can say with a straight face that they should sit down and go over everything with their kids?

I’m also interested by an implicit contrast between the second and third paragraphs. Educational institutions have the power to create accounts for persons under 13 years old, but educational institutions aren’t mentioned as those who should review the terms and conditions with students. Is it, once again, parents’ and guardians’ responsibility to make their children aware of the terms of use of any technology they use in school? That seems even more laughable—while there’s no denying that teachers and other educational professionals are overworked, that possibility seems like a dereliction of duty of both Apple and its educational partners.

Kids in schools (and their parents) deserve to know what’s going on with the tech that they use, and it shouldn’t be up to the kids (and their parents) to figure it out. If technology is going to be a part of a kid’s educational experience, schools and other bodies need to help them be well-informed.

You can use click on the < button in the top-right of your browser window to read and write comments on this post with Hypothesis. You can read more about how I use this software here.