This week and last, I’ve been reading up on Mormons’ commitment to both the language of the King James Version (Philip Barlow’s Mormons and the Bible is a fantastic read) and what is seen as the authoritative text of the Book of Mormon. In Paul Gutjahr’s The Book of Mormon: A Biography, he quotes the official Latter-day Saint Scripture Translation Manual as including the following guidelines for translators of the Book of Mormon:

This makes sense from a fundamentalist perspective on the Book of Mormon, but I wonder if it drives translators crazy. As I’ve been closely reading the Book of Mormon as part of my ongoing project, it’s become clear to me in a way that it never did in the past that there are run-on sentences and grammatical errors aplenty in the text of the book. In the third volume of his history of Community of Christ, Mark Scherer quotes an reader of the Book of Mormon from the 1950s who advocated in the official RLDS periodical for a modern-language edition:

If I saw a lame man going down the street I would offer him an arm or a cane. If I see a crippled text parading through the world, particularly one that I revere and love, should I do nothing to help?

Ableist metaphors aside, it’s clear that some who read the Book of Mormon recognize the inherent awkwardness of the text. However, this man’s RLDS contemporaries resistted this kind of argument, and the Scripture Translation Manual makes it clear that Salt Lake has never accepted this kind of thinking. 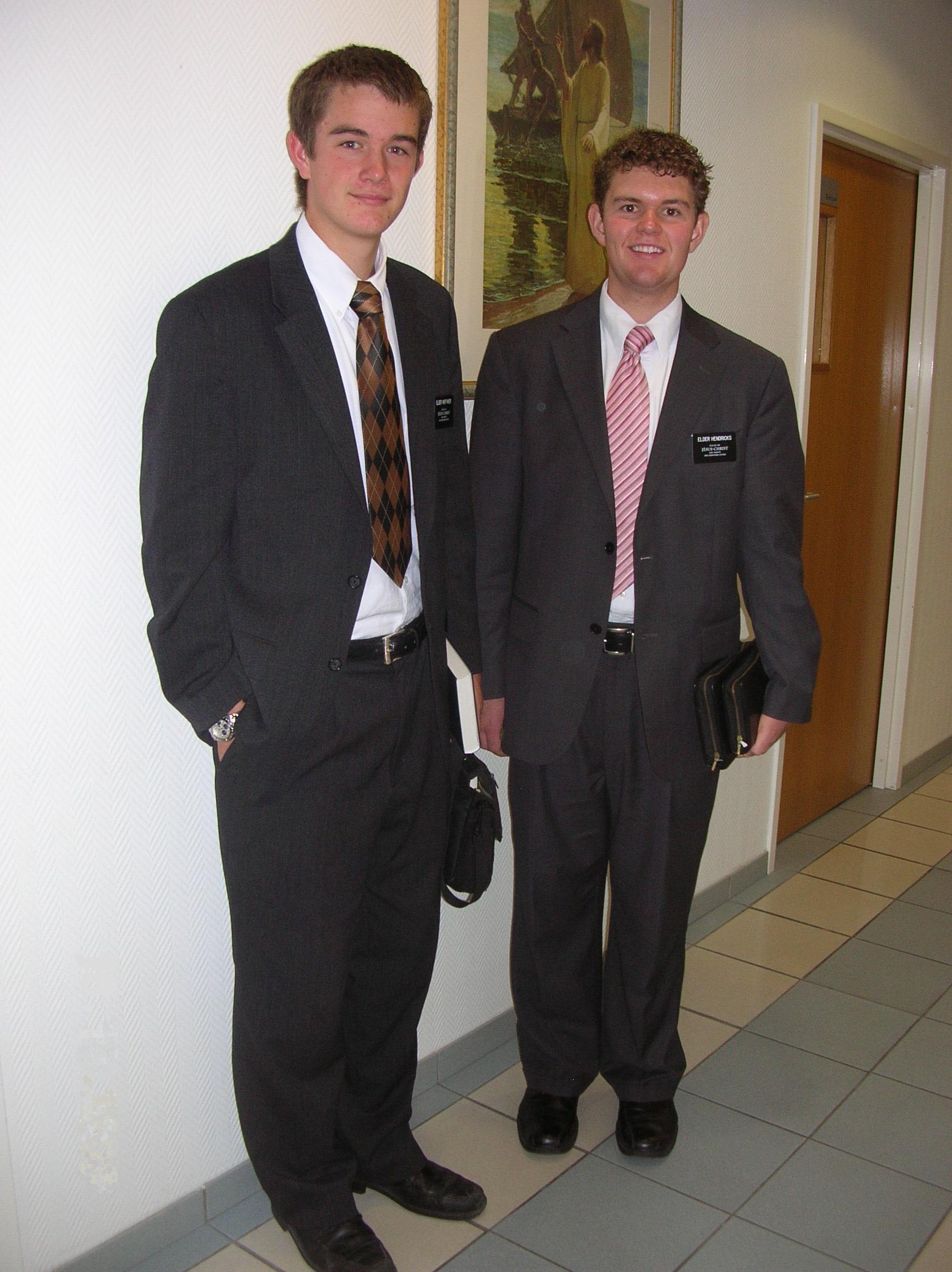 Reading all of this reminded me of a moment that I hadn’t thought of in a long time. During one part of my Latter-day Saint missionary service in France and French-speaking Switzerland, I was assigned to the beautiful French Alpine town of Grenoble. Quick aside: I include the picture above—which is used as a reference picture for the English and French Wikipedia articles for “Mormon missionary”—not because I think the reader will need a reminder of what Latter-day Saint missionaries look like, but because it is: 1) a picture taken in the Grenoble Latter-day Saint meetinghouse, 2) by a woman I met while serving in Grenoble, 3) of two missionaries that I knew. I even worked for six weeks in Dijon with Michael Hendricks, on the right. This picture is the closest I’ve come to being Wikipedia famous.

Anyway, I wasn’t working with either of these two missionaries during my service in Grenoble, but at one point, I did work with a great guy who was working hard at the time on memorizing scripture verses in French so that he could recite them from memory during any lessons or discussions that we had with people. He had several verses written down on index cards and would review them while we were traveling from place to place on the tramway or the bus (vivent les TAG !)

During one of these trips, a local became curious as to what my friend was doing and asked to review some of his cards. After reading one of the Book of Mormon verses that he had committed to card, she informed us that the French that was written there wasn’t very good. She may have asked us some questions about who did the writing/translating, but I can’t remember—what I am pretty sure I remember, though, is that she made a comment about it coming off as Belgian French. At the time, I accepted this as a legitimate sociolinguistic observation. In fact, I seem to remember that there was even a folk understanding among American missionaries in France that there had been a strong Belgian influence on the committee that had produced this translation.

However, after reading Gutjahr again, I’m wondering if it was actually something different. See, French people love making fun of Belgian people—I have a separate, equally-mostly-distinct memory of an instructor in a men’s church lesson in Dijon pausing his lesson to tell a “Belgian joke” that approached the racism of the “Polish jokes” that people of my grandparents generation might tell. So, if Latter-day Saint translations of the Book of Mormon are sometimes intentionally awkward (or rather, intentionally reproduce the awkwardness of the “original” English), and if the woman we spoke to on a Grenoble bus thought the French was poorly written, was her description of this Book of Mormon verse as “Belgian French” an actual recognition of distinctively Belgian vocabulary, syntax, etc. in the verse that she read? Or was this a way of deriding the quality of the French at the expense of French-speaking Belgians?

This memory is nearly 15 years old, and this is the first time that this alternative interpretation has ever occurred to me. I’m not offering it as “what I should have understood at time,” of course—the sociolinguistic observation understanding still seems plausible to me, especially if there were stories circulating among missionaries about Belgian translators of the Book of Mormon. It was a fun revisiting of a moment from a long time ago, though.

You can use click on the < button in the top-right of your browser window to read and write comments on this post with Hypothesis. You can read more about how I use this software here.